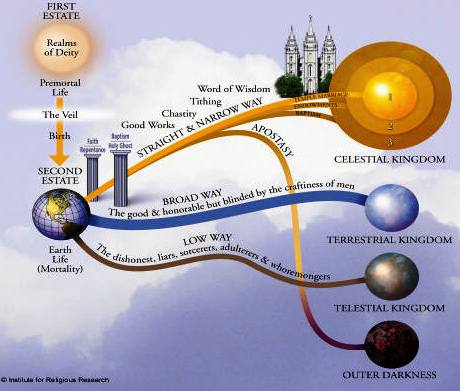 Our God is a Perfect, Loving and Fair Father

The atonement and its coverage is infinite and eternal, and covers everyone with certainty through spiritual underpinnings. Yet for one to take the highest kingdom and glory, namely the Celestial Kingdom, or highest Heaven, the gospel must be learned, accepted and lived, including faith in Jesus Christ, repentance, baptism and becoming a member of Christ’s covenants and Church upon receiving the confirmation of The Gift of the Holy Ghost, and then truly living thereby. In this there is true joy and peace.

There is forgiveness in the life hereafter, for those who have as yet not been taught by the servants of the Lord about their Redeemer, and Hisgospel plan of happiness. For there is much preaching and teaching taking place in the spirit world, where those who have passed, are awaiting their resurrection. But for those who have had ample understanding and have been pricked in their hearts to know the truth, but have not lived it, and have knowingly rebelled, these are they whom are sent to outer darkness, where there shall be weeping, wailing and gnashing of teeth.

All of these, who have not partaken of repentance, will spend some time in this place of cleansing, known in The Book of Mormon as, Outer Darkness. This is where one will truly be purified, although not in an easy way. It will be through the fire and brimstone burning process, wherein their Spirits will be cleansed. Then they will be sent to the kingdom of glory most suited for them. This is according to how they lived their life, with what they had, understood and felt. They will also be judged according to the desires of their hearts, so Jesus’ atonement will always have a good effect.

All who enter into this place of Outer Darkness shall leave, except for the sons of Perdition, and Lucifer and his devils, or fallen angels. The sons of Perdition are those who fully knew the Lord in this life, and His love and grace completely, and then knowingly and purposely chose Lucifer over Jesus Christ (this will be very few in number), of which it is said, it were better for them to have not been born. These, along with Satan and his devils will remain in the burning of outer darkness, until the marvelous day of reconciliation, when ALL God’s children will be called up unto the next eternal life. Again of a first, second and third estate, or, pre-earth, earth and post earth life, in a higher phase of existence and eternal progression.